Re: Original Contribution Funding of the Pathways to Technology Project

As those who have been following Pathways to Technology are aware, the project was originally funded through unconditional grants in 2008 and 2009 in the amount of $40.8 million. The grants originated from the Province of BC and Health Canada, and were flowed through Network BC (Ministry of Labour and Citizens’ Services) to All Nations Trust Company, where the project became branded Pathways to Technology.

In the interest of our continued transparency, we have posted the project’s original funding letters to the Pathways website. Not very gripping reading, but we are pleased to put the information into the public domain.

Releasing the documents serves an additional function for Pathways: it provides ANTCO with an opportunity to demonstrate to all stakeholders that ANTCO has been faithful and purposeful in fulfilling the mandate articulated in the funding letters. It has long been a guiding principle of All Nations Trust, that ANTCO honours its commitments without exception and insists that its partners honour theirs. The Pathways project is one more example of this principle in action.

A synopsis of the granting:

Readers will note that the letters outline a general strategic approach but employ language broad enough to allow for custom strategies and approaches, recognizing that ANTCO “has proven its ability to understand the people’s need for supports that make their communities thrive.”

ANTCO is obligated to provide both fund management and project management, and to hold all contracts and agreements in its own name. The granters expressed the expectation that ANTCO would be conservative in its investment approach and business-like in its execution of the project. Accordingly, ANTCO has adopted a long term view of First Nations connectivity in BC, and used the original contribution to leverage significant additional funding.

The granting documents articulate an expectation of two guiding principles for ANTCO:

We believe the work and accomplishments of the Pathways project over the past nine years, and the partnerships which have been forged during this time, are a testament to those guiding principles and the seriousness with which ANTCO has approached this important work.

We have endeavoured to be transparent, responsive and inclusive throughout the work, with community engagement forming the cornerstone of our strategy and work plans.

Information is disseminated regularly through multiple channels including:

For additional information, background and updates including communities that the project has connected to date, newsletters, articles and the interactive connectivity map, we encourage readers to visit www.pathwaystotechnology.ca.

Click here to view the Original Grant Letters for Pathways 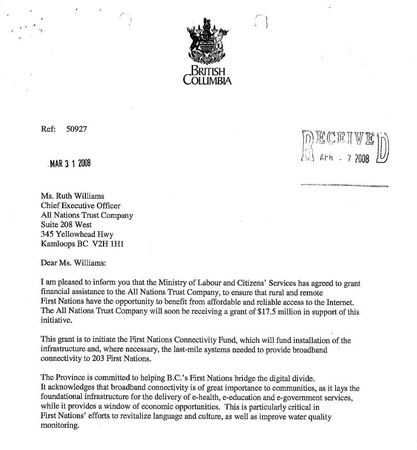