Connecting The Coast With The Help Of Pathways Partners 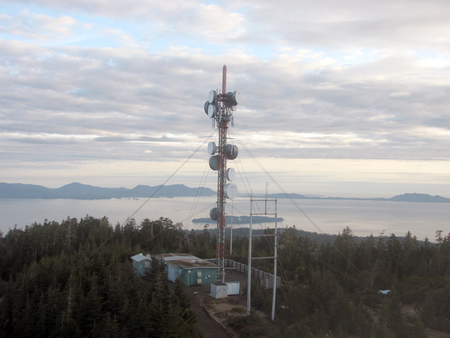 While the majority of Pathways projects have focused on connecting one or two First Nations communities at a time, the program is also working with partners to enhance services across entire regions.

An example of this cooperation is the Coastal Radio Upgrade, which began in March of 2013 in collaboration with TELUS and Alcatel-Lucent (ALU).  The team set off to complete an overhaul of the existing telecommunications network on the central and north coast of the province, upgrading the Internet capabilities in the communities of Heiltsuk (Bella Bella), Klemtu/Kitasoo, Gitga’at (Hartley Bay) and Gitxaala (Kitkatla).
The challenging build took crews through some of BC’s roughest terrain, from seaside villages to snow-capped coastal mountains.  ALU deployed its state-of-the-art high speed, high capacity 9500 Microwave Packet Radios across the region, connecting the remote communities with the rest of the TELUS broadband networks.
The new system not only offers increased reliability for local Internet users, but also opens the door to future enhancements, such as increased bandwidth and the addition of new Internet applications. Residents and businesses in Bella Bella, Klemtu, Hartley Bay and Kitkatla are already experiencing dramatically improved capacity and much faster Internet speeds.
"We recognize the demand for enhanced communications capabilities in this region, and have been planning this massive undertaking for quite some time,” said Lance MacDonald, TELUS general manager for Northern British Columbia.
"By replacing the older systems with this new technology, we will more than double capacity in the area, adding much needed bandwidth for residents and existing businesses. Importantly, this investment will also provide capacity to support the anticipated growth needs of the region as it builds new schools and health centres.”
"This was a team effort from the beginning, and with the help of both TELUS and ALU, we have been able to meet the challenging task of linking four isolated communities to the world of opportunity that a high-speed Internet connection provides,” added Ruth Williams, Pathways to Technology Project Manager.
Combine the technical expertise provided by TELUS and Alcatel-Lucent, along with the expanding vision of the Pathways to Technology team, and you have a groundbreaking project that will enhance the lives of First Nations communities  living on the edge of the Pacific for generations to come.