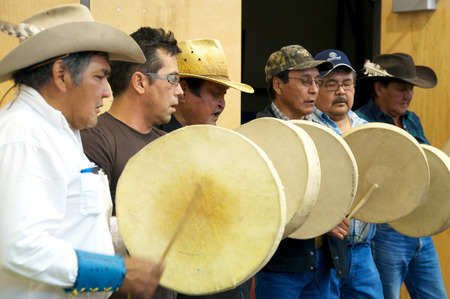 Columbia to high-speed Internet took a step closer to reality with the addition of a broadband connection in the remote northeastern community of Doig River.

In June, community members joined representatives from the Pathways to Technology team, along with Stephanie Cadieux, former Minister of Labour, Citizens’ Services and Open Government, federal and provincial officials and TELUS executives to make the exciting announcement at the Doig River community centre.

After a performance by the Doig Drummers and an elder prayer, community leaders blended the traditional with the technological – using a caribou antler and beaver pelt switch to activate Doig River’s first broadband Internet connection.

Chief Davis noted that until now the community’s Internet connection only reached the Band Office and was slow and spotty.

"The new system will allow our youth as well as workers in the oil and gas and forestry sectors to upgrade education, job skills and safety certifications – right from their homes.”

Once the Internet connection was established, community members immediately saw the power of high-speed access through a number of demonstrations.

Treaty 8 Tribal Chief Liz Logan joined the celebration by video conference link and representatives from the Enowkin Centre in Penticton – where local youth recently returned from a culture and technology workshop – also connected to the event over the Internet.

"I want to congratulate the Doig River people, ANTCO and the Pathways to Technology steering committee for all of their efforts in bringing broadband Internet to the community,” said former Minister Cadieux.

"This is one more step in the right direction as we continue to work together to bridge the digital divide and close the education, health and economic gap between First Nations peoples and other British Columbians.”

The broadband connection has also enabled the Doig River First Nation to conduct video-conference meetings with other groups regarding a variety of topics without leaving their offices, resulting in significant savings in time and money.

The Pathways to Technology project is a $40.8 million province-wide First Nations connectivity initiative managed by All Nations Trust Company (ANTCO) with funding from the Province and the Government of Canada. Doig River is the first community connected under the project’s contract with TELUS.

The goal is to ensure all First Nations in B.C. have access to affordable high-speed broadband Internet services to improve healthcare, open up educational and cultural opportunities for children and families, manage resources effectively and give businesses the tools they need to market their products and services around the world.

"The Pathways to Technology project is the 21st century version of the on-ramp for First Nations people and communities who have been bypassed by the Information Highway,” says Ruth Williams, CEO of All Nations Trust Company, which manages the Pathways project.

"Internet access and the technological leap this brings may be the greatest agent of truly transformative change that many remote First Nations have seen in a generation.”