Another Milestone Year For Pathways 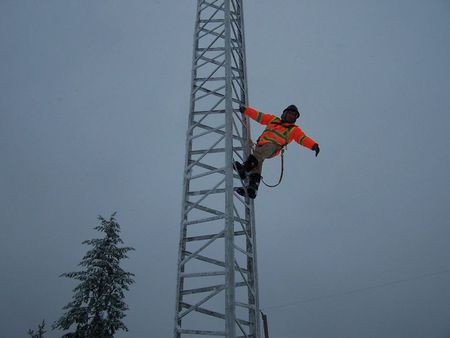 Four years since Pathways to Technology first broke ground in British Columbia, the project continues to close the gap on the digital divide for First Nations communities across the province.

As a federally and provincially funded program, Pathways is driven to meet certain metrics – with the key number being 203.  The team is committed to ensuring that all 203 First Nations communities in BC attain access to, at minimum, consumer-grade broadband Internet. But at nearly every turn, Pathways is providing service similar to that of a major metropolitan city – even in the most remote regions of the province.
As of the end of the fiscal year, 175 (86%) of First Nations communities in British Columbia had access to high-speed Internet.  Furthermore, in 184 communities (91%) the backbone of a broadband connection is in place, with only the local hardware installation and network development remaining.
"We have gained tremendous momentum behind the Pathways mission in the past 12 months, and don’t expect that to let up as we work towards our ultimate goal of giving every First Nations community in the province access to online resources,” said Ruth Williams, Pathways to Technology Project Manager. "With each new community that comes online, we are supporting the future of local businesses, schools, health centres, and band organizations through a world of opportunity they may have never experienced before.”
During the past year, work began in a dozen additional communities - including Coldwater, Saikuz, Nuxalk (Bella Coola), Huu-ay-aht, Heiltsuk (Bella Bella), Gitga’at (Hartley Bay), Gitxaala (Kitkatla), Klemtu/Kitasoo, and Wuikinuxv.  In five of those communities work was completed within months, and they are already enjoying all of the benefits of high-speed Internet.
Over the course of the year, the team forged partnerships with two new contractors and re-acquainted itself with a previous one.  City West, a business based in Prince Rupert, is working on a large-scale project that will bring fibre-optic connections to all of the homes in Gitanmaax. Meanwhile, Kamloops-based SAGE IT completed two assignments, providing last mile services and connections for the communities of Whispering Pines and Skeetchestn. Once again, Pathways partnered with Northwestel to bring broadband connectivity to the small town of Good Hope Lake, some 850 kilometres north of Prince Rupert. The community was outfitted with an initial 5 mpbs connection in the spring and will have access to 15 mbps service by the fall.
In the next few months, the Pathways team is on the verge of completing projects in many other communities, including Samahquam, Coldwater, Saikuz, and Lheidli T’enneh – bringing the team closer to its goal of 203 First Nations communities with a window to the potential of online connectivity.