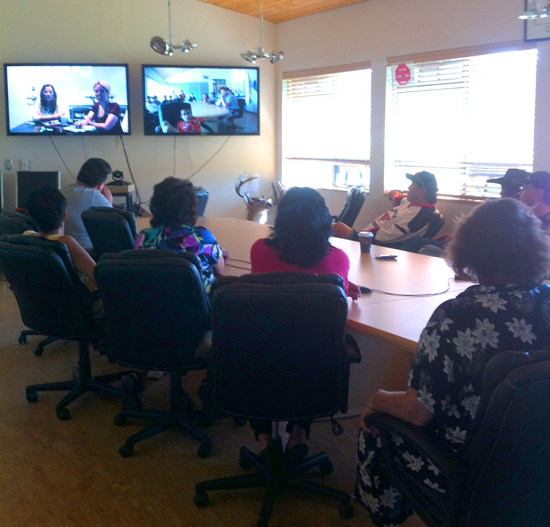 There is no doubting the geographical challenges that come with connecting every First Nations community in British Columbia to high-speed Internet. From villages perched on the edge of the Pacific Ocean, to towns nestled in the Rocky Mountains – no two projects are the same. But the Pathways team is breaking down barriers, and delivering broadband solutions in every corner of the province.

The Homalco First Nation, on the eastern coast of Vancouver Island, has access to many of the modern amenities available in larger centres, but for many years was still reliant on a slow dial-up Internet connection. The same problem rang true in Doig River, located nearly 60 kilometres from the nearest city in the remote north-eastern corner of BC.
"These were two communities about as different in location, tradition, and technology as you could imagine,” said Jamie Sterritt, Pathways to Technology’s Community Relations Officer. "And that meant our project team had to adapt to the physical challenges of each location, and come up with innovative solutions to bring high-speed Internet into each community.”
In the case of Doig River, the first region to receive a broadband connection through the Pathways project, a TELUS fibre-optic line was run into the band administration building to serve as the principal Internet hub.
From there, two transmission towers were built to accompany a third wireless access point on the local water tower – providing high-speed Internet coverage for 55 homes and 225 Doig River residents.
Meanwhile, the more urban centre of Homalco also received a fibre connection at the band administration building during its Internet upgrade, but that’s where the similarities ended. The existing cable plant was retrofitted to provide broadband services to each home in the community through the existing underground coaxial television lines – eliminating the need for overhead wires and utility poles.
But for all of the differences between the two communities, the impact of a broadband Internet connection has produced nearly identical results.
"It’s been a wonderful opportunity to connect our community as a whole,” said Alison Trenholm, Homalco’s Band Manager. "There has been a huge benefit in the use of social media to connect with family and friends and we have also developed a Facebook page for band members, where we can keep them up to date on activities and events.”
"We have also established social media tools for our community’s youth,” noted Doig River Band Manager Ronda Herman. "Now we’re creating new web pages for the band and our latest project, the Doig River Tribal Park, which protects the K’ih tsaa?dze region from the impacts of oil and gas development and forestry activities.”
The business benefits of a high-speed Internet connection are being noticed in both communities as well. In the past, students creating resumes and job applications would have to work out of the Homalco administration building – now that can be done from the comfort of home.
In Doig River, staff and band members are using the broadband service to complete online testing and earn certification tickets, while the council is seeing a tremendous cost-saving through the use of video conferencing.
"Council members often meet with lawyers and experts to discuss treaty land entitlement, along with health and education issues, but in the past they would have to fly to Vancouver, Edmonton or Calgary for those consultations – trips that come at a significant cost,” said Herman. "Now they can spend more time focusing on local concerns rather than travelling an entire day for a meeting that may only take a few hours.”
But perhaps the biggest advantage in both communities is the reliability of a broadband connection. No longer does the service in Homalco hinge on the satellite dish surviving a winter storm, or the staff in Doig River have to pack up entire computer stations and fly them to Vancouver for a simple upgrade that can now be done online.
"It’s about giving all of the province’s bands access to 21st century technology that other British Columbians take for granted,” added Sterritt. "When it comes to growing the economic and social aspects of our communities, a reliable high-speed Internet connection is fundamental for First Nations to keep pace in the modern world.”
So whether it’s a wireless install in the Peace Region or a major overhaul on the Island, the Pathways team is committed to bridging the digital divide for First Nations people throughout British Columbia.