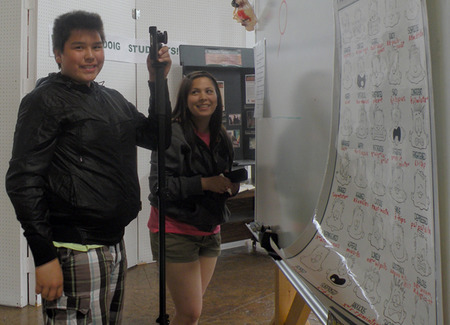 FNTC continues to work with Doig River youth and Garry Oker, Tracey Bonneau and Matthew McNeill of Symbols Design on building multimedia capacity with Doig River youth. As a result of all the work done by the team, some of the Doig youth are already getting contracts from industry in their territory to develop communications materials.

FNTC has contracted Symbols to develop materials for an Animation Workshop and has secured an Apple computer travelling lab so that animation workshops can be delivered in other areas of the province. The animation workbook is based on Garry Oker’s Indigenous Hero’s Journey. The Hero will travel from Doig, bringing stories that can be linked with stories from other cultures.

Stay tuned, the Hero could be coming to your territory to bring technical skills to your youth so that they can create their own stories!

FNTC is taking a very broad view of capacity building in the province. As such, we’re able to play a role as a bit of a ‘broker’ and are very excited to be part of a growing relationship between the Blueberry First Nation and Seabird College. Seabird College opened September 2010 and had a graduation of 50 this spring.

Among the courses being offered are Information Technology (including A+ and Cisco Networking Certification), Business IT (targeted at Administration workers), Graphic Design and introductory GIS – a course that was developed by FNTC and that is getting huge interest. Using recently installed technology from Health Canada, Blueberry students will be taking these and other courses being offered by Seabird Island.

Speaking of Technician Training, FNTC is working with the College of New Caledonia and PGNAETA (The Prince George Nechako Aboriginal Employment and Training Association) the local ASETS Holder to deliver a Technician Training program aimed at the 17 Nations in the PGNAETA catchment area that includes Prince George. The course is slated to begin in January 2012.

FNTC is working hard to build partnerships with Industry. IBM has gifted FNTC a technology camp that includes 10 copies each of Lego Robotics, Snap Circuits, Data Harvester, numerous software packages and 10 laptops. They have tested the camp and will be delivering another one shortly in Prince George at the Aboriginal Choice school. FNTC will be developing a strategy to move the Technology Camp around the province.